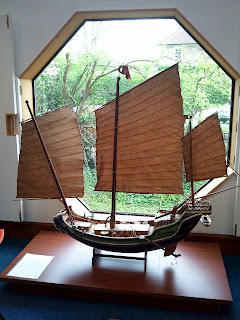 A select band of GLG members found their way to Sylvester Road on Friday evening 4th of May, to a hidden and surprising building: the Needham Research Institute. We were greeted by the enthusiastic librarian, John Moffett, who is a graduate of the Chinese Studies Department, Edinburgh University. He has been Librarian of the East Asian History of Science Library at the NRI since September 1992.

John explained that he had been diverted into Chinese studies at Edinburgh because the History lectures were too crowded. After our usual refreshments (including Chinese rice crackers) John gave us an entertaining talk about Joseph Needham and the history of the Institute which bears his name. It was an adventure story, of expeditions into unknown territory, dalliance with attractive young ladies, and a card catalogue of all the people Prof. Needham met in China with their interests and publications all cross referenced. He was assisted by his wife Dorothy (also a biochemist), his Chinese lady friend, and many Chinese scholars in collecting thousands of offprints on subjects scientific, technical, medical and cultural.
On his return to Cambridge, Prof. Needham began to write up his findings, with the CUP willing to publish one volume. This expanded steadily over the years and is so far into its 23rd volume, the work continuing after Joseph Needham’s death.

From the NRI website:
“OVER HALF A CENTURY AGO, Dr. Joseph Needham embarked on a long-term project to investigate the scientific and technical contribution that the Chinese people have made to human culture.

THE NEEDHAM RESEARCH INSTITUTE, which houses the East Asian History of Science Library, is the home of the Science and Civilisation in China project, and welcomes researchers from all over the world with an interest in the history of science, technology and medicine in East Asia.

The library now holds about 30,000 titles, including a number of important collections, and about 20,000 offprints. The library subscribes to a wide selection of journals, many of which are Chinese publications rarely available elsewhere in Europe.

Scholars working in the Institute typically include collaborators on the Science and Civilisation in China project, established academics on sabbatical, doctoral and post-doctoral researchers on one-year fellowships, and other shorter term visitors from around the world. In addition there is a constant stream of academics from the wider Cambridge environment.”


We had a fascinating glimpse into a world we had hardly heard of, and which is now becoming so much more important with the resurgence of China and all its many manufactures which have entered our homes in recent years. 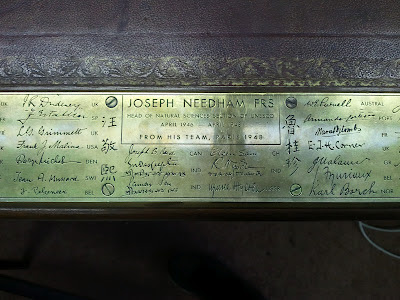 This new post brings together responsibility for managing all the support functions for the County Council’s Libraries, Archives and Information service including stock management and distribution, business specific IT systems, management information, research, planning and policy, and infrastructure development.

For more details see the job advert on the Jobs in Cambridgeshire website.
Posted by Annie Gleeson at 15:46