October talk: John Wagstaff, “Not born in the USA: a career journey to America and back”

Following close on the heels of the AGM, John Wagstaff, currently Librarian at Christ’s College, Cambridge, gave a fascinating talk on his career journey, specifically his appointment as Librarian of the Music Faculty Library at the University of Illinois at Urbana Champaign.  During his time in the US, he saw the transition of the Music Faculty Library to becoming the Music and Performing Arts Library, absorbing the theatre and dance collections.

John explained how he got the job, the value of having a specialism and being able to use the services of a professional group, in this case the Music Library Association, the professional association for music libraries and librarianship in the United States.  Networking proved a huge boost.  He had responsibility for several staff, as his library is one of the larger music libraries in the US. The University also houses the top library school in the US, and he regularly had four graduate assistants from the library schools to work on specific projects.

John’s talk was peppered with interesting nuggets about our neighbours across the pond. We also learned that a Green Card is not actually green in colour, it’s white with a green stripe on the back. His dry wit was evident throughout his talk, especially when he talked of how misunderstandings can arise with different words for things. My favourite was his explanation of chocolate pitfalls: 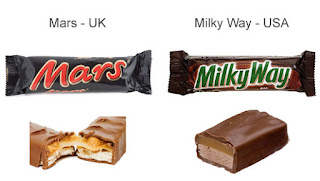 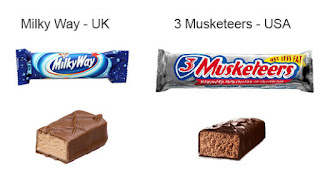 And, despite a huge Kraft factory in Champaign, and John being resident there at the time of Kraft’s takeover of Cadbury’s, he confirmed that their Cadbury’s chocolate tastes nothing like the Cadbury’s Dairy Milk in the UK.  Who knew that a CLG talk would be so educational in confectionary!

Getting back to library matters, it was interesting to hear the difference in management styles.  He found that his American colleagues were sometimes uncomfortable with him asking for their opinions – they expected to be told what to do. The donor culture was also quite different – you are expected to go out and get financial support for your library, and the donor then gets a substantial tax break, so it is more attractive to them to make donations in support of libraries.

Summing up, he advised the whole experience was something he could recommend.  His top tips were the value of having a specialism, trying an internship or job-swap first, and cautioning against travelling to the US and then looking for a job, as you need an institutional sponsor first.