My philosophy of work, as an early career professional, is to learn about a lot of varied topics, especially for helping me understand future situations in which I might find myself. So when this talk on professional resilience was advertised, I thought I would go along so that I could understand what this meant and see if I could learn anything to ensure I would be resilient in future. 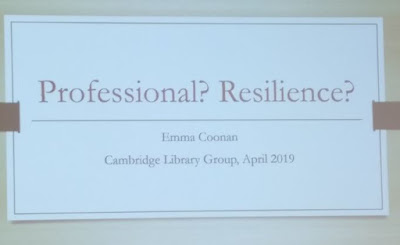 Emma began by unpicking the idea of “resilience”, as this is now a very loaded term. A lot of job specifications and interview questions are asking about a candidate’s ability to be resilient. The dictionary definition of resilience is the ability to recover quickly from something bad. For the visual learners in the audience, Emma displayed an image borrowed from Lisa Jeskins Training called the “Reservoir of Well-Being”. The image exemplified an average person’s emotional reserves, with the attendant descriptions of what could top-up your reserves but also what could drain them. The clear warning was that you might be drained to the point of burn-out if you do not keep your reservoir filled. One of the best ways to refill your emotional reserves is to “give time” to something you love, whether that is study, creative activities, being outdoors, or being around other beings.

Now that we had this basic understanding of what helped you maintain resilience, Emma began examining the idea of resilience at work, particularly looking at who is responsible for it. A blog post by Skills To Go was presented as being less than ideal in discussing work-place resilience. The overriding idea is that you are the responsible party: you have to know what you need, you have to incorporate loss into your being, and, though stressful/toxic environments often trigger discussions of resilience, the role of the employer in changing this is rarely discussed. In this, she cited a recent tweet by Twitter account @PatJD: 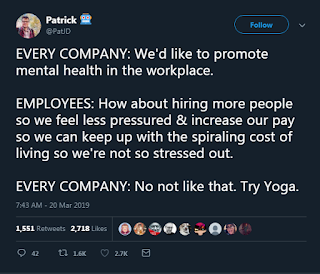 The key idea is that workplaces are not considering their role in burning out their workforce by demanding too much. Research in higher education acknowledges the many demands being made on the workforce without the benefits of previous generations and is asking whether HE institutions should be preparing students for this situation. Emma recommends pushing back against this by asking “is this the right approach?”. Though those who currently ask this are often considered disruptive, Emma implies that nothing will change unless such questions continue.

Emma then related a story by Emily Rogers from the book The Self as Subject which detailed how a professional librarian was broken by the lack of respect for her time and the (in my opinion) inappropriate response of the institution she worked for. She was set on a “remedial” career path towards tenure after shouting at an academic colleague in a public area of the library, which Emily accepted, and which ultimately led to her becoming the head of the tenure committee of her institution. What this led Emma to note was that “low morale” workplaces are not necessarily generated by active bullying but also by negligence. What has come through in recent research on the subject is that a lack of acknowledgement of success and effort leads to low morale, which consequently leads to an inability to defend one’s self. Resolution of these situations is usually due to someone (often, you) leaving, but that can be difficult if the low morale is causing you to feel low self-worth, which then means you do not come across well in interview.

Three main points really stood out for me. First was the really helpful idea of “giving” time. Though Emma had referred to it first in relation to the “Reservoir of Well-Being”, it was her clarification towards the end of her talk of the importance of this phrase in reminding one’s self that it is not selfish (as implied by saying you “spend” or “take” time) to care for your own emotional well-being. Second was her conclusion where she noted that she could not give solutions, as solutions that do not work lead to further feelings of low self-worth. This was something she wanted to avoid and it fit with the idea that there is no one magical way to counter a low morale environment. Third was a response to the question of what recovery from a low morale situation might look like. This was intensely personal to me, as it turns out I am recovering from the low morale situation of completing a PhD. What spoke to me most was her point that to some it might sound like “compulsive bitching”, but repeatedly telling your story helps you come to terms with what happened, helps you get distance, and helps you regain agency over the situation. She also mentioned that this could take from one to two years at least, so I expect that anyone who asks about my PhD in the next 18 months will hear my story, but just know it is because I am trying to recover my resilience!

Emma had concluded her talk by offering a few tools and tips for improving on low self-worth, all of which supported Jane Kenyon’s notion that you should “[b]e a good steward of your gifts”. She especially encouraged us to do at least one thing we love by Sunday and I would echo her by saying you should do at least one thing you love by the end of the week in which you read this blog post!